You are here: Welcome to wiki.met.no » Diana » Getting Started

This document aims to describe what is needed to get a released version of Diana up and running on Ubuntu 12.04 (Precise) from a set of Debian packages. It is assumed that you will be using the version of Ubuntu that the packages were developed for.

To build Diana for other distributions, see the Building Metlibs and Diana with Autotools page for an installation guide then continue reading the Installing Data Files page.

To build a batch version of Diana for headless systems, install bdiana according to the instructions on the Batch Diana on Headless Systems page then continue reading the Installing Data Files page.

Obtain a set of release packages for the current release of Diana. Follow the instructions on the Installing Diana from Launchpad page to install and test the packages.

Diana expects to find a diana.setup file in various locations:

If you built and installed Diana 3.39 from source, or installed a package from Launchpad, there should also be a setup file in the following location:

If you installed the maps and demo data in a location other than the default, you will need to change the OPDATA and MAPDIR lines in the diana.setup file. For example, if these resources were unpacked in the /data/diana directory, these lines need to be changed to read:

This means that you need to have a diana.setup file in a place where you can edit it. Possibly the easiest way to arrange this is to run Diana without a diana.setup file then immediately quit. This will cause the .diana directory to be created in the user's home directory. Then copy the /etc/diana/3.39/diana.setup file (or the correct one for the version you are using) into that directory for further configuration.

It is useful to test that the basic installation works correctly, particularly on headless systems that only allow bdiana to run. Copy the following text into a file called test.input:

Process the input file using a command like the following, using the appropriate executable and setup file for your configuration:

A file called test.png should be created that looks like the following image: 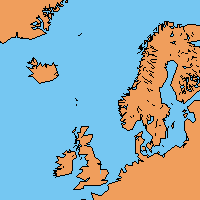 If the file is not created or the image is blank, check the output from bdiana to determine whether the diana.setup file and map files were found correctly.

You can also find more input files to test in the diana-extras repository on GitHub. The files can be found in the testfiles/input directory.

If you have created a diana.setup file in a location other than one of those mentioned above then you need to pass an option on the command line to specify where it is.

The path specified must be an absolute path.