How to configure and install

How to test the software

The purpose of the METAMOD 2.x software is threefold:

As additional projects were seen to benefit from using METAMOD 2.x software, a need for making the software independent of a single project emerged. This was obtained by organizing the software in different modules, and by separating all project specific aspects into a configuration file. METAMOD 2.x now comprise the following modules:

The software is implemented in Perl on a Linux system with Apache web server (as proxy). Catalyst is used to implement dynamic web content, including PMH and other webservices. The database is based on PostgreSQL. Metadata elements use controlled vocabularies from GCMD and CF1.0 as well as WMO keywords. Tools for extracting metadata from NetCDF/CF files are part of METAMODUPLOAD. Access to the actual data files are provided as links from the web pages generated by the METAMODSEARCH module.

The local data repository is an ordinary file system where files are orginized in catalogs according to institutions (data providers) and data sets. The catalogs and files must be accessible through URLs. This can be done using HTTP, FTP, OPeNDAP or a combination of these protocols. The DAMOCLES application use a THREDDS Data Server (giving OPeNDAP and HTTP access). If the data files satisfy OGC standards, THREDDS may also provide OGC WCS access. 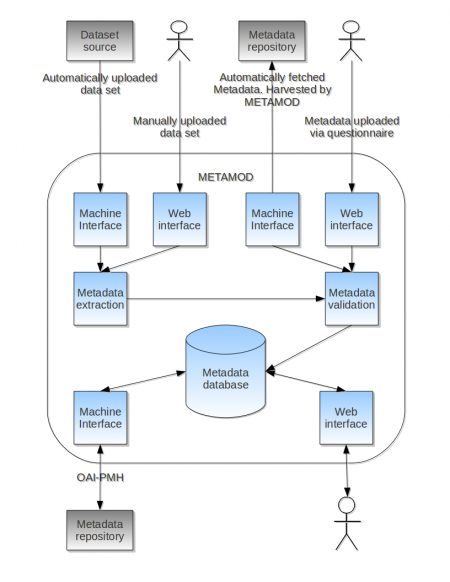 In addition to offering a repository of metadata it is possible to extend the functionality of METAMOD by intergrating it with other systems. 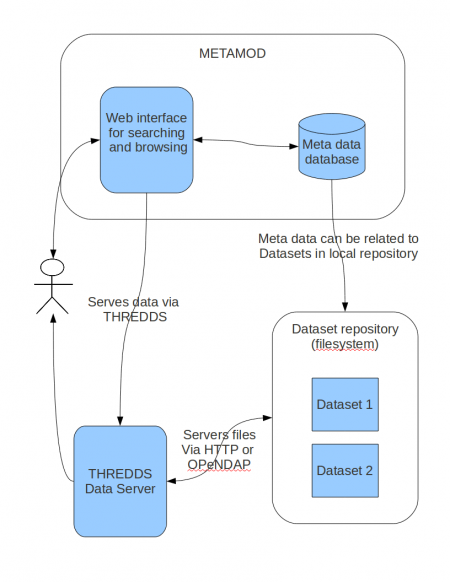