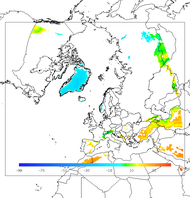 The fimex-program is considered stable and the releases are those used in production at met.no. API- and configuration changes are still likely between two releases.

Development versions can be found in the git repository: https://github.com/metno/fimex. Development usually occurs in the master branch, so it might become instable any time. Stable versions have tags like fimex_MAJOR_MINOR_PATCH….

Previous versions are also available on launchpad, from another PPA: